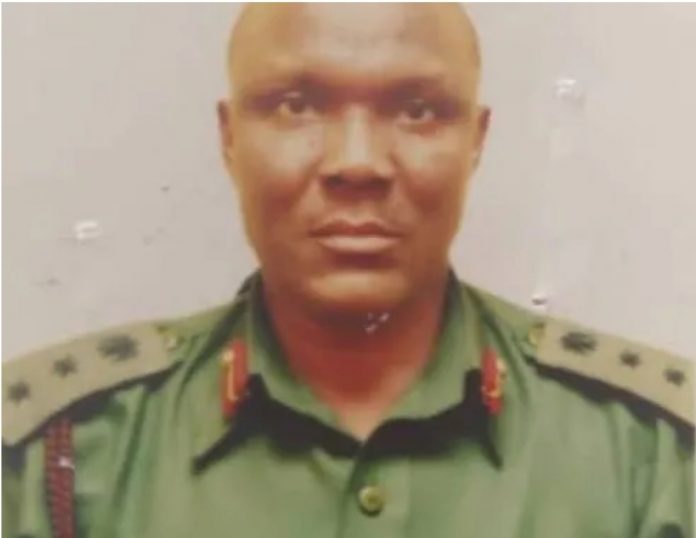 As the Nigerian Army continues to defy the law and progress in error on the matter of some retired officers whose cases have been resolved by courts of competent jurisdictions, fresh facts have now emerged about how Lt Colonel Thomas Arigbe was humiliated while on special international assignment at Ghana Armed Forces Command and Staff College.

It would be recalled that 38 senior Army officers were compulsorily retired in 2016 in controversial circumstances. Some of the affected officers had secured judgements ordering the Army to reinstate and pay their outstanding arrears but the Army has refused to comply.

PRNigeria gathered that Lt-Col Thomas Arigbe was ‘terribly embarrassed when an SMS went sent to him on a training programme in a foreign country.
On June 18, 2015, Arigbe was posted to the Ghana Armed Forces Command and Staff College as part of the Bilateral Directing Staff Exchange Programme, for a two-year duty tour with effect from September 2015 to September 2017.

PRNigeria gathered that Lt-Col Arigbe was delivering lectures at the military Colege when he received a text message from Nigeria on 10 June 2016 that he had been compulsorily retired. The college community was thrown into confusion by this action particularly as the Ghana authorities never had any communication with and/or from Nigeria on any misconduct.

The strange development caused the then Ghanaian Commandant to ask Lt-Col Arigbe if that was how officers are retired in Nigeria, via text message!

Worried by his sudden disengagement without any form of fair hearing, query or probe, the embattled officer wrote to President Muhammadu Buhari through the Chief of Defence Staff as stipulated by the Harmonised Terms and Condition of Service, but never got any response.

He later sought redress at the National Industrial Court (NIC), in Lagos.

The court delivered its judgement on Thursday, 16 January 2020 and ordered the Nigerian Army to immediately reinstate Lt. Col.  Arigbe.

In his judgment, Justice Paul Bassi declared his retirement from service as wrongful, unconstitutional, illegal, null and void.

The judge ordered the Army to give the officer all his rights and privileges, including all his entitlements from when he was forcibly retired to date.

The judge held that the Nigerian Army compulsorily retired the claimant without fair hearing, adding that it (Nigerian Army) failed to place anything before the court to prove any wrong committed by the officer to warrant the compulsory retirement. The court also awarded a cost of N300,000 against the defendant.

Checks by PRNigeria have also confirmed that the Army authorities did not appeal the ruling of four of the officers when they were ordered to reinstate them yet have blatantly refused to comply with the court ruling.

A member of 45 Regular Course of the Nigeran Defence Academy and a former Directing Staff at the Armed Forces Command and Staff College, Jaji,  Lt-Col Arigbe obtained a Master’s Degree in Communication Engineering with distinction in the United Kingdom in 2011.

Upon his return from study in the UK, he was posted to Damaturu where he served as second-in-command at 241 Battalion and Chief of Staff Operation Restore Order III where he undertook delicate and sensitive military missions in the counter-insurgency operation in the North-east.

Some of the positions he held in the military included Staff Officer Grade One (Training and Exercises) of the Department of Land Warfare and served as the Military Assistant to the then UN Force Commander at the United Nations Mission in South Sudan. He also represented Nigeria at the Combined Joint European Exercise in April/May 2014.