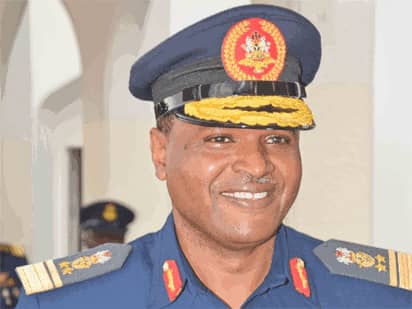 The Nigerian Airforce have always been a distinct arm of the Nigerian Military Forces and has marked alot of glory that have further been consolidated and enhanced in the last five years under the stewardship of Air Marshal Sadique Baba Abubakar (rtd).

As a valorous officer that has set a record as the longest-servicing Air Chief, Air Marshal Abubakar has no doubt repositioned the flying force to become a highly professional and disciplined Military arm, achieving the most transformational developments in national security; the rise of capacity building and the new relevance of signals intelligence in our networked world most of which are tremendous achievements recorded for the first time in history of Nigerian Air Force Services.

One may recall that when Baba Sadique became the Chief of Air Staff in July, 2015, he released a vision statement, part of which reads that his aim is, “to reposition the Nigerian Air Force into a highly professional and disciplined force through capacity building initiatives for effective, efficient and timely employment of air power in response to Nigeria’s national security imperatives.”

Those are powerful words of a forsighted and valiant individual which he eventually marched with action.

Prior to his assumption of office as a Chief of Air Staff, Kaduna Flying School had only three (3) aircrafts, training for about 50 student pilots on each course but with his assumption on duty the school now has 15 aircraft that are flying, conducting ab inition pilot training and has trained more than three hundred qualified pilots apart from helicopter flying, instructor pilots, fighter pilots trained in a bilateral relationships he created with foreign countries like Egypt, Morocco and Azerbajain.

During his time as Air Chief, he was able to train and retrained Air Force technicians to do most of the maintenance works locally. I am sure most readers are aware of the historical maintenance of Air Force carried out in Lagos on C-130H aircraft for the first time in the history of the Air Force in Nigeria. As a record breaker, Air force were able to successfully conduct Periodic Depot Maintenance (PDM) on the C130H aircraft and three Alpha Jets in Kainji within the Nigerian territory. The first attempt made many years back was not successful.

For the first time in the history of Nigerian Air Force, Baba Sadique created females’ flight crew for operational surveillance mission. In the crew, the captain, co-pilot, technicians and airborne camera operator were all women. Even when they landed, the person who was marshalling them to park was a female. This is an opportunity given to women gender and this will send a powerful message to all females on the contribution they can offer to the society even in Military Career.

Baba Sadique confirmed that Human beings are the most important resource that any Nation has, hence he recruited over 10, 000 personnel into the Service in the last five years, and despite enormous constraints, he has tried all his possible best in addressing the welfare concerns of Air Force personnel in order to make them more effective with their stable and timely allowances. These personnel are fully accommodated in well-furnished houses. They also have access to medical facilities and those that have families enjoyed the right to good education of their children. Anybody who visits any of the Air Force Base of the country can confirm the decency of the environment with modern infrastructural design beautifully created to support the psychological mind of Air Force operation and provide a sense of decency and courage to the personnel.

And make no mistake, by the way Baba Sadique leads and serves and one can tell he has enjoyed the journey. One can tell how much he loves the people of this military and the nation they serve. He cherishes the security they provide together so that men and women across the country, and indeed, across the world can go to school, go to work, raise their children, live their lives, dream their dreams in a peace despite the challenges he inherited from the predecessor administration. It’s the love of his love and inspirations which inspired me to be passionate about pursuing the career in Nigeran Air Force Service.

On his assumption he inherited four inadequate structure of Field Commands whereby he evaluated and assessed them critically and found it worthy of modification and created new additional field commands while separating the erstwhile Training Command which was handling both air and ground training and established the Air Training Command (ATC) and the Ground Training Command (GTC) differently, to give focus on different aspect of training. Also during his time, he disparate Logistics and Communications Branch which was in charge of communication, procurement, works, services and logistics into 2 Branches; the Logistics Branch and the Communications and Information Systems (CIS) Branch. The CIS Branch deals with all issues relating to ICT, communications, utilization of space assets amongst others. This was done due to the cumbersome and the wide span of control whereby individuals could not really handle.

In another development, while upgrading the Directorate of Medical Services to a Branch status, with subordinate directorates to meet the requirements occasioned by the rapid expansion of the Service he established reference hospital in Bauchi, another in Daura, and the Hospital in Port Harcourt was also upgraded to a reference Hospital.

Based on his philosophy in fighting against terrorism and insurgency, Baba Sadique came up with a non-kinetic approach to the fight which focuses on providing medical services to the Internally Displaced Persons (IDPs) and other people in the area of conflict. He created a fora and engaged the communities affected by insurgency to seek for their support to fight the terror act through one of his best approaches of Medical Outreach Programme. This approach has really helped the victims of Boko Haram and paved way to Air force in accessing the information they need while continuing with several air interdiction mission to neutralize the Terrorist and Bandits in various places such as sambisa forest, lake chad and some part of Zamfara of Northwestern region of the country where bandits are at powerful operations.

Baba Sadique recorded the Air Force flyimg over 37,000 hours in Northeast only in order to ensure that they provided the required air support to the ground troops and logistics resupply. He supplied food, ammunition, medical equipment and also evacuate those who have been wounded to Maiduguri with Airforce helicopters. Another area of logistics support is the movement of troops and equipment in and out of Maiduguri, using the C130H aircraft.

It is well commendable under his command there is no obstacle of time in supporting the Federal Government food distribution programme into Maiduguri, he made sure the food items were flown in on time, since agricultural activities have been affected by the endangered terrorist group of Boko Haram.

The Air Force have trained Regiment and Special Forces personnel fighting side by side with the Army. Special Forces of Air Force were in North East deployed to fight on ground apart from the statutory role of conducting air operations. More than 250 Special Forces in Zamfara State, about 300 Special Forces in Benue State under the DHQ-led Operation Whirl Stroke. And in some of the Nigerian conflict zone like Agatu in Benue, Gembu, Sardauna of Taraba, Lafia of Nasarawa State, Owerri, Plateau, Special Forces Quick Response Groups/Wings (QRGs/QRWs) that are supporting the ground troops in Internal Security Operations in various theatres were deployed. Those units are equally there and they are doing excellently well to provide support and are working in synergy with the Army in curtailing the unwanted attack of innocent citizen of Nigeria.

On his capacity in showing the relevance of Nigerian Air Force in resolving conflicts with the use of projecting air power not only within Nigeria, but also outside Nigeria. Air Force under his command have taken relief materials to Sierra Leone; supported Malawi, Mozambique and Zimbabwe during flooding disasters on behalf of Federal Government, and also made a bold movement to resolve political empasses in Gambia at the beginning of 2018 whereby Yahye Jamme tend to not relinquish power to the democratically elected leader. Nigeria was the only country in West Africa that went with fighter aircraft to Senegal then flew to Gambia and made sure the democratically elected leader was sworn in.

While within Nigeria, in the 2019 General Elections, Nigerian Air Force were able to move over a Million kilogrammes of electoral materials, in record time in lieu of effective, stable and secured environment of democracy to flourish without which there would not have been a successful election without delay in the country.

No wonder Outgoing Chief of the Air Staff Air Marshal Sadique Baba Abubakar confidently said last year that he will leave Air Force smiling and thanking God for giving him opportunity to impact positively on the lives of Nigerians when the country was thirsty for having a courageous and dauntless leader who will exercise a bold and progressive leadership.

Sadique is a cerebral leader who deserves a lifetime honour of the Air Force Medal of Achievement conferred on him for his valour and intrepidity towards repositioning the Nigerian Airforce.

He has contributed to providing a secured Nigeria where terror acts has been reduced to minimal level during his time.

His contribution was not only to Nigerian Air Force Personnel but to the both class of elites, middle class and most vulnerables among Nigerians in general. His stature supposed to be build at the heart of Nigerians to emulate sense of modern and progressive leadership for future generations to remember his dedication and sacrificial services in the history of Nigerian Air Force and entire country at large.

I believe the current NAF leadership will continue to place high premium on capacity building initiatives aimed at developing competencies and skills of personnel of all specialties in order to add value to the status quo towards ensuring the security of lives and properties of Nigerians by exploiting clear and critical thinking to deploy vigorous, thoughtful and innovative approaches to a large extent which will continue to determine the effectiveness of the Nigeran Air Force in meeting critical considerations for Nigeria’s defence and national security.

Lastly, I will like to end with prayer to the most outstanding, courageous and brave Chief whom his name will never seize to exist in the book of history in Nigerian Air Force. May God continue to put smile on your face as you wish before your retirement. Good bye Air Marshal Sadique Baba Abubakar (Rtd).

Writing on the Wall of Anambra 2021, By Martins Oloja

Underrate Atiku at Your Peril, By Hashim Suleiman

Nigeria needs a ‘strong man’ as president, by Fredrick Nwabufo

Zulums’ Extreme Concern: a Blessing not a Mess, by Abba Ali Abatcha