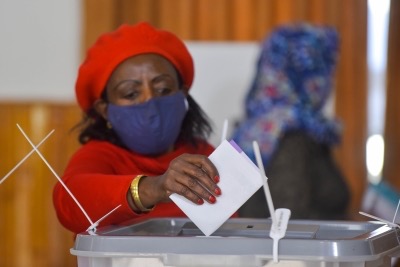 “Despite the challenging security landscape, the mission commends the security measures put in place by Ethiopian authorities, which ensured a largely peaceful environment on election day,” said Obasanjo when presenting the AU election mission’s preliminary statement.

“The mission concludes that despite some operational, logistical, security, political and Covid-related challenges, overall, the pre-election and election day processes were conducted in an orderly, peaceful and credible manner,” he said.

On Monday, Ethiopia held twice-postponed general elections in seven of the 10 regional states, with voters choosing candidates vying for 440 of the 547 parliamentary seats in the East African country.

The National Electoral Board of Ethiopia has previously disclosed security and logistical challenges as well as faulty ballots and electoral malpractices, which have forced it to postpone voting in 107 of the 547 parliamentary seats.

Under Ethiopia’s parliamentary government system, the Prime Minister who is the highest authority of the land is selected from the party that wins the most seats at federal parliament level and will be sworn in after parliamentary votes.