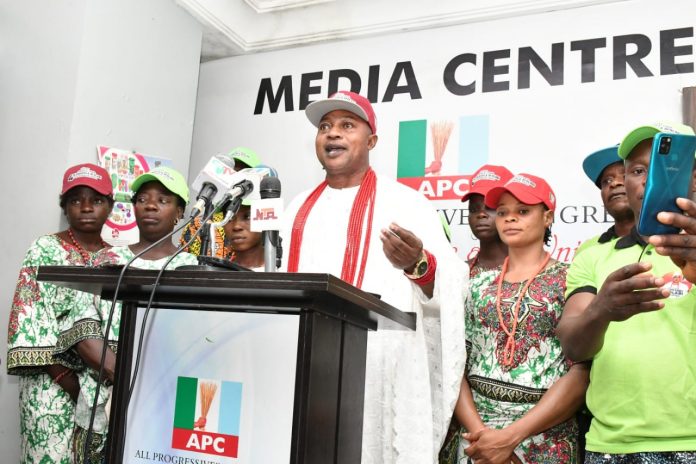 Oluwatoyin Afolabi, one of the aspirant for the 2022 Ekiti governorship election has debunked the rumored that he’s being sponsored to contest the election

Afolabi who made this known at the APC secretariat in Abuja on Wednesday said, he was not being sponsored to block the chance of any aspirant and smoothen the path for anyone as he was in the race through self sponsorship, having saved at least $50,000 he got from his investments in the United States of America.

He continued “I just told you that I got $50,000 last year which is equivalent to more than N22.5million. Since I have the ambition to do something for my great people of Ekiti, I kept the money in the bank. How about that. I’m sponsoring myself.

“My goal is to come back to Ekiti State to create jobs. To help our young ones. There are lots of youths who are riding Okada here and there. They don’t have any viable job to sustain their lives and that is part of the peculiar reason why I have decided to run to be the Governor of Ekiti State this year by the grace of God,” he stressed.

“My goal is to be able to help a fellow human Ekiti Indigene to attain their potential. They have so many potentials in them. We have the intellectuals there. We don’t have people who can come there and established factories and industries who can create business opportunities all because some of the people that are at the hems of affairs are not giving them conducive environment to be able to do that,” Afolabi concluded.

Ekiti governorship : I’ll not step down even for $200bn – Popoola

BREAKING: Ganduje faction loses as Court strikes out motion for stay of execution