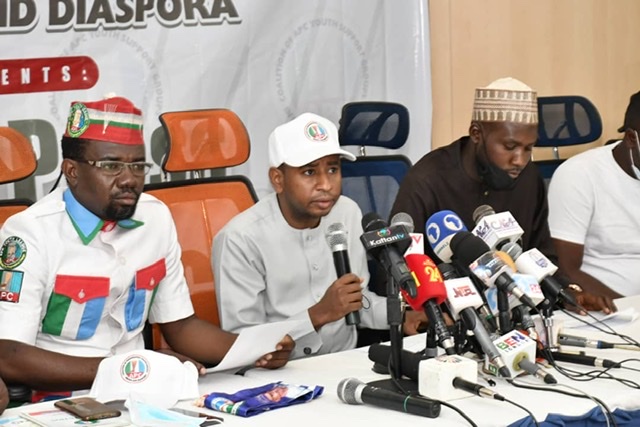 No Faction in APC – Youth Leaders

Reports of factions and crisis in the All Progressives Congress (APC) national leadership is false and should be discountenanced, the leadership of APC registered youth groups in Nigeria and the Diaspora has said.

The APC youth leaders spoke in reaction to the activities of a purported group “Progressive Youth Movement” whose illegal activities have been reported to the Police, Department of State Services (DSS) and other security agencies.

Addressing the media in Abuja on behalf of the Youth leaders, Director-General of the Coalition of Progressive Youth Groups in Nigeria and the Diaspora (COPY-ND), Dr. Aminu Abdullahi Isyaku, said the actions and declarations by the disowned Progressive Youth Movement was a part of a grand plot by their sponsors to destabilize the APC National Caretaker Committee under the leadership of Governor Mal Mala Buni and also disrespect President Muhammadu Buhari’s support for the Party’s leadership.

“Our message is simple: The APC is a party of rules and due process and is too critical to the Nigerian Youth, that cannot be distracted by a mere press briefing and reckless announcement of new leadership arbitrarily by a sponsored group that is alien to our coalition and to the Party,”  Dr. Aminu Abdullahi Isyaku stated.

The statement reads in parts: “We want to set the record straight and calm the anxiety of APC youths, and declare that there are no faction or leadership crises in the All Progressives Congress. We are the ruling party and we have one Caretaker Party leadership in place, led by Governor Mai Mala Buni as appointed unanimously by the National Executive Committee of the Party.

“We are a volunteer coalition that is driven by the concern that we have for the need to correct the negative impression created by the careless actions of the so called PYM, that Nigerian youths in politics are desperate and disrespectful to constituted authorities.

“Accordingly, we have painstakingly analysed the political events in the last few days in the youth constituency of the party and wish to state without ambiguity, that the COPY-ND is not part of this grand plot to distablise the party under the leadership of Governor Mal Mala Buni, and also to disrespect President Muhammadu Buhari’s support for the party’s leadership that he led to put in place.

“Therefore, the so called new leadership announced by this sponsored desperate youth group – PYM does not represent the views of the teeming youths that form the foundation and remain the assets of our great party.

“Our message is simple: The APC is a party of rules and due process and is too critical to the Nigerian Youth, that cannot be distracted by a mere press briefing and reckless announcement of new leadership arbitrarily by a sponsored group that is alien to our coalition and to the Party.

“It is rather unfortunate that at a time when we have a president, who has restored the image of the country, and is developing the needed infrastructures, diversified the economy, improved food security, fighting against insurgency and corruption, developed social investment programmes and youth inclusion in governance via his assent to the not too young to run act., but some people are ready to undermine these legacies and must not be tolerated.

“In the party today, we have a caretaker committee that has navigated the party from the brink of rancor, and steered the party onto a safe ground and restored order in the party through; membership registration and revalidation, constitution of tripartite committee, contact and strategic committee, major election victories, institutionalisation of reward system in the party, and defection of governors and chieftains into the party.

“Thus, rather than channel our collective energies and votes to supporting the fruitful efforts of the government and the party leadership that is determined to mainstream the youth in all its activities, including in the next National Working Committee (NWC), NEC and indeed all statutory organs of the party, and governance, some youth members are mortgaging these opportunities to those who are clearly manipulating them.

“While we acknowledge the democratic rights of all party members, it is our firm conviction that the focal point of any such rights should be in the interest of the country, the party and the people of Nigeria and in line with laid down processes and procedures available in the party structure.

“We therefore call on the Party to investigate the root cause and personalities involved in this unconstitutional power grabbing in the Party, and if they are truly members of the Party who acted against the law, the Party should apply sanctions on them immediately.”