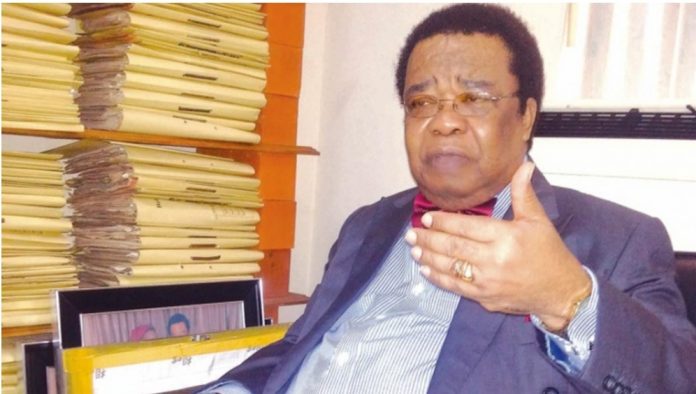 POLITICS DIGEST- One is bound to be tempted to write on different issues today, specifically on those ones that tried men’s souls in 2021, a year in which one newspaper’s editorial was bold enough to claim that life had no value in Buhari’s Nigeria. Yes, only the spirit man led me away from temptation to write on yet another budget bill just signed into law.

The temptation was high to write again on the significant electoral bill that was not signed and the way it has become an error of tragedy that the president’s henchmen have been defending without compunction. I had wanted to send a message to the federal legislators too who also lost their mojo and bowed to the forces of darkness that has already enveloped the governing party and their soul-mates in the opposition party. After all, they all don’t want clean elections in our failing country.

But then as I was reflecting over how to look at the architecture in the ruins of 2021 and so many promises not kept by this regime, I looked again into the seeds of time and saw January 4, 2021 when one of our worthy elders, Professor Akinwande Bolaji Akinyemi, would clock 80. Indeed, I can’t ignore the significance of that landmark for a man from whom some of us have borrowed so much brilliance. I have listened to Professor Akinyemi’s seminal contributions at the Editorial Board of The Guardian where I have also served for years. There is therefore a sense in which I can say without equivocation that he is one of our brightest and the best in Nigeria. He isn’t a professor who lives on residual knowledge and influence. He reads and studies a great deal. He also listens to others so deeply.

When you ask him any questions, you will be delighted by his answers. He is a deep one, always “calling to the deep”. He is without any guile. If he isn’t familiar with any subtext, he will tell you point blank he isn’t at home with it. I would like to shout out 80 hearty cheers to that professor of significance. May the good Lord who has blessed him to be a blessing to this generation continue to keep him strong and healthy.

I would like to say that Akinyemi has been one of the critical success factors of The Guardian Editorial Board. The unique Board chaired since 2011 by a former Vice Chancellor of the Obafemi Awolowo University, Professor Wale Omole has a number of world-class professors and other young scholars including a former army chief and diplomats that no sophistry can sway anyhow. Akinyemi is a gold fish here: he can’t hide. We are grateful for your contributions so far, professor. May the God of all grace continue to preserve all your bow ties Sam Omatseye was admiring last year when he wrote:

‘We know his trademark bowtie and voice of halting poise like a slow-burning campfire to illumine the brows of nobles.  This vision makes me still wonder why Professor Bolaji Akinyemi’s acts as Nigeria’s external affairs minister did not earn him the tag of “bow-tie diplomacy… ‘

Akinyemi, son of a famous principal of Ilesha Grammar School, the Reverend J.A Akinyemi (who hails from Ifewara) was born on January 4, 1942 in Ilesha, Osun State. He attended Igbobi College, in Yaba, Lagos from 1955 to 1959, Christ School, Ado-Ekiti, from 1960 to 1961, Temple University, Philadelphia, Pennsylvania, United States, from 1962 to 1964, Fletcher School of Law and Diplomacy, Tufts University, Medford, Massachusetts, US, 1964 to 1966, and Trinity College, Oxford, England, from 1966 until 1969

At 43, Akinyemi became Nigerian Minister of External Affairs in 1985 and held the job for two years before Major-General Ike Nwachukwu replaced him. His predecessor in that office was Professor Agboola Ibrahim Gambari who served during the military dictatorship of Major-General Muhammadu Buhari. Gambari is still serving in the presidency of Buhari as Chief of Staff. Akinyemi’s rise has been phenomenal.

He obtained his doctorate degree at 27. At 33, he became the Director-General of the Nigerian Institute of International Affairs. He became a full professor at 41.

Specifically, Akinyemi, professor of Political Science bagged his doctorate degree from the prestigious Oxford University in 1969. He was an instructor in the Politics of the Developing Nations in the North Eastern University, Boston, Massachusetts; a Visiting Professor in African Studies at the DePauw University in Greencastle, Indiana; a Visiting Professor of Political Science at the Kalamazoo College in Kalamazoo, Michigan.

In 1985, he was appointed the Hon. Minister of External Affairs. During his period as the Foreign Affairs Minister, he was involved in negotiating the cease-fire in the Chad – Libyan, and in the Mali – Burkina Faso war.  He conceived and moved the concept of the Concert of Medium of Powers — an idea which sought to bring together middle powers for the purpose of using their collective bargaining power to mediate disputes within the international system.  He also introduced the Technical Aid Corps Scheme to radically restructure the Nigerian foreign assistance programme. The scheme is still thriving.

After his ministerial assignment, the Centre for International Studies, University of Cambridge, England appointed him a Fellow of International Relations. He is also a Life Member of Clare Hall, University of Cambridge, England. He has been a member of the following reputable bodies and institutions: the International Advisory Board of the Centre for Strategic Studies, University of California, Los Angeles, U.S.A.; International Institute of Strategic Studies Committee on Regional Security Studies; Academic Advisory Board, Candido Mendes University, Brazil; United Nations Group of Experts on Disarmaments. Development and Security in Africa; Nigerian Government Panel on the History of Nigeria since Independence; Election Observer, Human Rights Group, Zimbabwe.

Akinyemi, a prolific writer, has written many books and contributed his publications to many reputed and recognised local and international journals. He is candid about his convictions and would express them without minding the owner of the ass that brays. His radical views and beliefs about political life and issues have distinguished him as one of Nigeria’s most respected scholars of politics and diplomacy and ministers of foreign affairs. His collaborative fight for the soul of this nation against the authoritarian regimes of the past attests to this. This is anchored on his belief that only democracy and freedom of expression can guarantee sustainable development. Akinyemi has also mentored a lot of successful and accomplished personalities in Nigeria and in other parts of the world.

In 1987, radical Akinyemi stated his support for Nigeria developing nuclear weapons. He referred to the proposal as the “black bomb,” and observed that “Nigeria has a sacred responsibility to challenge the racial monopoly of nuclear weapons…”

In August 2007, President Umaru Yar’Adua appointed him to the then expedient Electoral Reform Panel chaired by a retired Chief Justice of Nigeria, Mohammed Lawal Uwais . None of the lofty recommendations of the panel aimed at reforming the electoral system has been implemented till the present. He is happily married to Mrs. Rowena Jane Viney Akinyemi and they are blessed with children. Please, join me in wishing this scholar of significance a loud and hearty 80 cheers this January 4. May the God of all Grace who has blessed him continue to keep him safe in His pavilion.