POLITICS DIGEST- The Ministry of education in Niger Republic has closes Annahda University in Maradi over violation of its educational laws.

In a letter signed by the Minister of Higher Education Mamoudou Djibo said it takes the decision after receiving series of complaints over the conduct of academic activities in the university.

He said the government will only open the University when it complies with the regulation in force.

The closure  was followed after the report of a committee which the Ministry of Higher Education set up to investigate academic activities of the university. 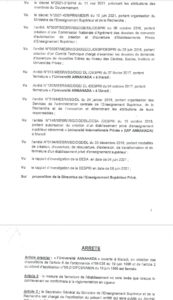 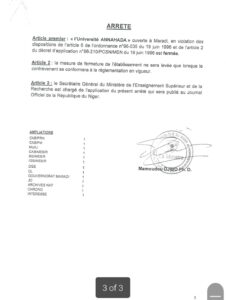 It would be recalled that the Nigerian government banned Annahda University and others in Benin Republic, Cameroon from participating in the National Youth Service Corps scheme.

It was gathered that the universities, most of which award degrees a few months after matriculation, are also called “Cotonou Universities”.

In a circular containing the ban, dated March 5, 2021, which was addressed to State/FCT Coordinators and sighted by POLITICS DIGEST, the reason for their delistment was not officially stated.

It however instructed that all D&R and foreign trained verification officers in states to take note.

Recently, the Director General of the NYSC, Shuaibu Ibrahim, accused universities in the Benin Republic of presenting unqualified persons for its one-year mandatory national service.

Mr Ibrahim, a brigadier-general, stated that NYSC had begun investigations into the activities of the universities involved in the fraudulent practice.

It would be recalled that in 2018, Daily Nigerian, an online paper published an investigative report of how Nigerians went to Benin Republic to bag a degree certificate in six months and maximum one year.

A situation that led the government to react by banning and ensure rigorous screening of students from such mushroom universities before being mobilized for the National Youth Service Scheme.

After realising the damage that report have caused to mushroom universities in Cotonou; they came to Nigeria and establish An-Nahada International University with Satellite Campus in Gusau, North- Western Nigeria and main campus in Niamey and Maradi in Niger Republic.

The letter which read in parts:

I’m directed to inform the Director-General NYSC that AN-NAHADA International University Gusau, Satelite Campus is not known to the National Universities Commission. The University is therefore operating as an illegal institution in Nigeria.

Consequently, certificates obtained from such institutions/Programmes will not be used for the purpose of employment, promotions, conversions and further studies. Also graduates of unapproved institutions/ programmes cannot be mobilized into the National Youth Service Scheme”.

The National Youth Service Corps is a program set up by the Nigerian government to foster unity, involve Nigerian graduates in nation building and the development of the country.