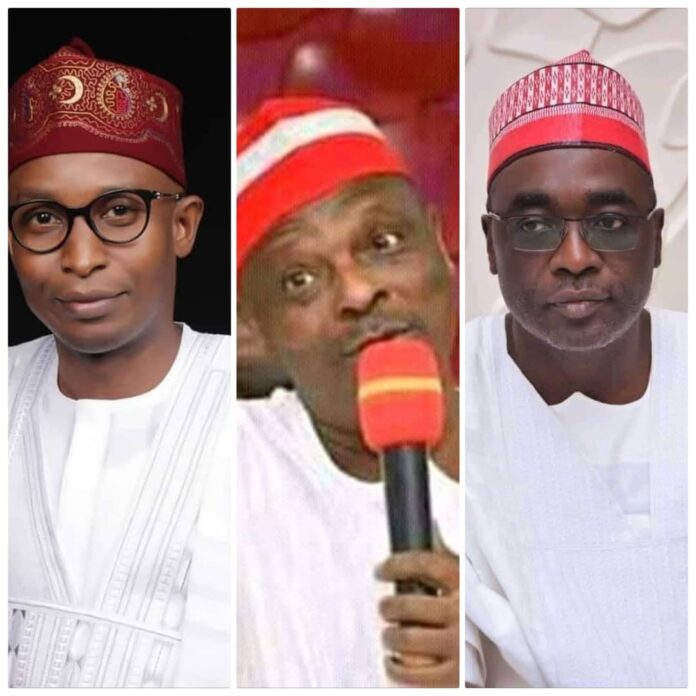 POLITICS DIGEST-  The People’s Democratic Party in Kano under the leadership of its chairman Shehu Wada Sagagi has constituted a disciplinary committee to investigate the duo of Dr Yunusa Adamu Dangwani and Yusuf Bello Dambatta.

The committee was set up following a petition written against Yusuf Bello Dambatta by one Ahmed Sani Maidaji from his constituency.

Dangwani was a former chief of staff to former governor Rabiu Kwankwaso before he was redeployed as Commissioner of Water Resources.

He has appeared before the committee set up by the party to answer questions over allegation of sabotaging the party and its leader Rabiu Musa Kwankwaso on Thursday.

Dangwani who is seen as the second in command of Kwankwasiyya movement have been at loggerheads with Kwankwaso’s governorship anointed candidate in 2019 election Abba Kabir Yusuf popularly known as Abba Gida Gida.

Not Dangwani alone, Abba has not been in good term with majority of Kwankwasiyya Stakeholders as they accused him of convoluted ego and disrespect to their person despite serving as Commissioners and aides to their leader Kwankwaso.

Another person that appeared before the committee on Wednesday was Yusuf Bello Danbatta, he was a commissioner for Budget and Economic Planning before being redeployed to Ministry of Land and Physical Planning,  he later served Sen. Kwankwaso as his Legislative Aide in the 8th Assembly.

Dambatta was the youngest commissioner in Kwankwaso’s second term.

The song was shared on social media platforms and has created exchange of words between supporters of Abba Kabir Yusuf and Dr Yunusa Dangwani.

POLITICS DIGEST exclusively gathered that Kwankwaso ordered the committee to recommend the expulsion of Dangwani and Dambatta from the party in their final report.

The committee members include:

The former governor is disturbed with large number of support they are enjoying in his camp, allowing them to stay with him is a threat to the governorship ambition of his anointed candidate Abba Kabir Yusuf.

Dangwani, a medical doctor by profession was the brain behind so many strategies of the movement right from 2003, he’s not only a close associate of Kwankwaso but a family friend.

He studied MBBS at Bulgaria and had his postgraduate studies at St.Petersburg Medical Academy in Russia.

He held several positions including Chief Medical Director of Abubakar Imam Urology Hospital, Executive Secretary Hospital Management Board in Kano before he was later appointed as Chief of Staff to former governor Kwankwaso between 2011-2012.

Yusuf Dambatta who is the youngest among the Kwankwasiyya Stakeholders is a  graduate of Bayero University, Kano and alumni of Havard Kennedy school of Government and International Monetary Fund Institute (IMF).

He worked at the office of the economic adviser to President Olusegun Obasanjo and later National Poverty eradication programme in 2002, National Planning Commission and deployed to Federal Ministry of Finance as Technical Assistant.

He was later appointed special adviser to the Honourable Minister of Finance between 2007 to 2011.

He has contested for the membership of House of Representatives in Dambatta/Makoda Constituency losing to Badamasi Ayuba Dambatta of APC in 2019.

This is coming at a time when supporters of a member of the North West Caretaker Committee of PDP Hon. Aliyu Sani Madaki clash and beaten one Hamisu Saadu Dogonnama whom they accused of disloyalty to their leader. Dogonnama is the Vice Chairman Kano Central of PDP.

The incident happened at the residence of Sen. Rabiu Kwankwaso on Thursday.

POLITICS DIGEST efforts to reach the party chairman Shehu Wada Sagagi for comment over the matter was to no avail as he didn’t respond to the call and text message sent to him by our reporter.