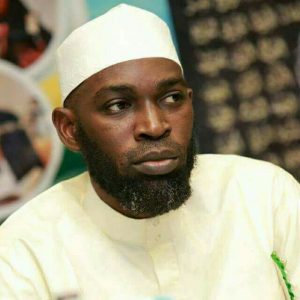 POLITICS DIGEST- A Lagos lawyer and right activist, Kabir Akingbolu, has called on the Nigerian Police to apply decorum and resist being used against a leading South West Islamic Scholar, Mallam Yusuf Adepoju.

Akingbolu, who is the principal partner of salawu,Akingbolu & co. in a statement issued at the weekend described the recent bombardment of Adepoju’s Ilobu, Osun State home by the police as an infringement on the scholar’s fundamental human right. He also described as blackmail and frameup the allegation that Adepoju’s name is featured in a case of defamation of character being investigated by the police.

It would be recalled that Adepoju’s travails started a few days ago when suspected individuals were seen loitering around his Ilobu, Osun State Home. As a law abiding citizen, even when his family called him that they suspected some movements around his house, Adepoju had simply dismissed it as nothing but the imagination of his people. He was wrong!

Like a thief in the night, on Tuesday, 16th, November, 2021, the house of this Islamic scholar was besieged by people suspected to be either from The Nigerian Police or DSS around 3am. Though Adepoju was lucky not to be around when the ‘visitors’ came, he obviously got the message in the hard way through the emotional torture inflicted on members of his family.

Few hours later, precisely around 5pm in the evening, when Mallam Yusuf thought the siege was over, the visitors returned, this time in a military commando manner, armed with a letter of invitation from the Office of the Commissioner of Police, Police Special Fraud Unit (FCIID), Abuja. In the letter of invitation, it was stated that the office was investigating alleged case of Defamation of Character/Character Assassination, where Mallam Yusuf was allegedly featured.

The letter which dated 16th of November and signed by one Tahir Usman, a Deputy Commissioner of Police, further reads; “In the light of the above, you are requested to interview the Deputy Inspector General of Police through the Deputy Commissioner of Police, Special Fraud Unit, Force Criminal Investigation Department, Area 10, Garki, Abujaon 24th November, 2021 at 1100hrs for clarification on the alleged case.

The letter which dated 16th of November further reads; “In the light of the above, you are requested to interview the Deputy Inspector General of Police through the Deputy Commissioner of Police, Special Fraud Unit, Force Criminal Investigation Department, Area 10, Garki, Abujaon 24th November, 2021 at 1100hrs for clarification on the alleged case.

Reacting to the development, Barrister Akingbolu said it was obvious that some powerful individuals in the society who are not comfortable with truth and pragmatic evangelical movement of the renowned Islamic Scholar are bent on taking him out of the way by all possible means, either legal or illegal.

“It’s rather ridiculous that in a civilised society and with the frantic effort being made to suppress issues that could aggravate to religious crisis, some section of the Nigeria Police is still falling for blackmail being sponsored by some individuals to oppress or silence other parties. On this note, I call on Police authority to thread with caution in addressing the issue as Adepoju has never been found in the past to clash or being in contention with anybody. To me, this development can only put our highly revered security agencies in ridicule and public odium if they are being used by egocentric people to score unnecessary goals” He said.

Earlier, Adepoju’s brother, Mr. Mubarak Adepoju had issued a ‘save our souls’ statement where he called on concerned individuals in the society to come to the aide of Mallam Adepoju over threat to the life of the Muslim cleric.

Meanwhile, the Abuja invitation has not only unsettled Mallam Yusuf and members of his family, it has thrown many Muslim Umma into confusion on the fear that the clamping down on Mallam Adepoju is a systematic way of frustrating his Islamic evangelism.

Another question being raised in some quarters was the rationale behind issuing Police invitation to Adepoju from Abuja and not Osogbo.

Besides, those who could read between the lines have begun to link the ongoing trial of Adepoju with the November 26 public lecture slated for Ilorin, which many people think some individuals are working tirelessly to scuttle.

“People also believe that the idea to take him to Abuja instead of Osun State might not be unconnected with having him where ABUJA they want or where he won’t be able to wriggle out from those paid to do the hatchet job. But as a Muslim, our client believes strongly in the protection of Allah which supercedes any threat or tribulations,” the statement further stated.