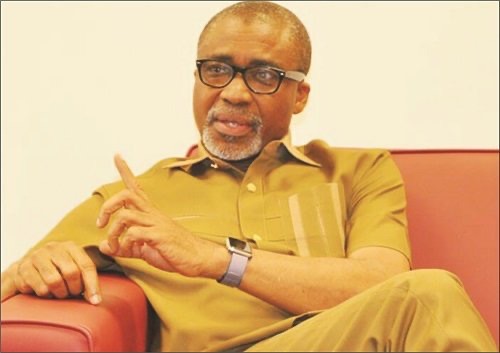 POLITICS DIGEST – Although the 2023 National Assembly Election is still two years away, Associate Editor, Sam Egburonu, reports that some interested parties are already agitating that Senate Minority Leader, Senator Enyinnaya Abaribe, a fourth term senator, and former Deputy Governor of Abia State should leave his Abia South Senatorial seat either for Governor Okozie Ikpeazu or for an aspirant from Ukwa bloc

As part of the permutations for 2023 power sharing in Abia South Senatorial District, some interested parties and groups are of the view that Senator Enyinnaya Abaribe, a former deputy governor of Abia State, a fourth term senator and the current Senate Minority Leader, should not contest for the Abia South Senate seat in 2023. They argued that Abaribe, who represents the district at the Red Chamber, should instead seek for a federal appointment in 2023 or assume the role of a political guardian to other aspirants who also want to make their contributions in the politics of the district.

According to Mr. Isaac Ubani, a youths activist, there is no doubt that Senator Abaribe is one of the popular elected officials in Abia State today that has done the state and his constituency proud but by 2023, I believe he should not, on moral ground, re-contest for the Abia South senate seat after four terms. If not that Governor Okezie Ikpeazu, also from Abia South, is the current state governor, who would be concluding his second term as governor in 2023, I would have suggested Abaribe, a former deputy governor in this state, contest for the governorship position. Since we all know the zoning arrangement will not allow someone from Abia South to succeed Ikpeazu, I will advise Abaribe to seek for a respectable federal appointment in 2023, a top political party office or to return home in Abia as a political leader and guardian, pending when the zoning arrangement will favour Abia South again.”

Madam Esther Iheme, a PDP supporter in Aba, disagreed with Ubani. She told The Nation this week that it would be a pity if Abia leaders, especially Abia South political elders introduce petty sectional sentiments that would stop Ndigbo and Nigeria from having a senator of Abaribe’s stature at the National Assembly. “Senator Abaribe has done well as a senator and as a credible voice of the people. So, why should we try to stop him from contesting in 2023? He is today one of the best we have. Yes, Ukwa people may say they should produce the next senator. That is not a bad idea per say but my advise is that Ngwa and Ukwa people are brothers. Why are we fighting over this seat? There are other important positions. When are we, as a people, learn to always put our best foot forward? I think this senator is a quality voice that should not be muffled by mere internal politics, she said.”

Will Ikpeazu contest the senate seat?

At the beginning of this year, there were unconfirmed reports that Abia State Governor, Okezie Ikpeazu, may soon dump his party, the Peoples Democratic Party (PDP) and defect to All Progressives Congress (APC). Some politicians and insiders, who originated the report, claimed that part of the reasons behind the alleged plan to defect to APC is to enable the governor freely contest for the Abia South Senatorial District, since it is not yet certain that Senator Enyinnaya Abaribe, the current representative at the senate, would be willing to surrender the PDP ticket to the governor without a fight.

So, when in January this year, PDP members gathered for the party’s first stakeholders’ meeting in the state, concerned members were eager to understand the governor’s political moves ahead of 2023.

Responding to their inquiries, Ikpeazu told them at the meeting, which held in Umuahia, that he has no ambition of defecting to APC.

Reiterating that he would always remain a member of PDP, Ikpeazu said the state belongs to the party, which according to him will ‘retain the state in 2023.’

He therefore advised his supporters in PDP ‘never to panic over the rumour,’ alleging that some PDP chieftains that defected did so because he “refused to promise them automatic tickets for 2023.”

Stating that the PDP remained the party of choice in the state ahead of 2023, Ikpeazu advised his party members not to allow “their personal ambitions to override the party’s interest.”

His assurances at the meeting notwithstanding, some insiders have continued to say the second term governor is getting set to contest for his Abia South Senatorial seat immediately after the completion of his second term in office as the state governor. “While I may not confirm the report of his likely defection to APC before the 2023 elections, I can say the governor is not planning to retire back to his house at the expiration of his second tenure. No. He is too young to do that. I am aware that majority of his close political associates, including some top PDP members here in Abia, other powerful community leaders and elders within Abia South, actually want Governor Ikpeazu to proceed to the Senate in 2023. Realising the likely battle that may ensue if the governor attempts to deny Senator Abaribe the PDP ticket, I believe some of his associates must have suggested the best approach for Governor Ikpeazu in the unfolding scenario may be to either defect or at least threaten to defect to APC,” says a top PDP leader in Abia who pleaded not to be named.

The source disclosed that the future political move of the governor has become a major issue in Abia PDP today. “No matter what anybody may think about the matter, PDP leaders within the state and outside know that Ikpeazu is still too young to be retired politically. So, if he is denied the opportunity of going to the senate, how would he be settled to ensure peace in the ruling party? That is the question many of our leaders have not been able to answer. The result is that many interest groups, many stakeholders have been peddling rumours aimed at fulfilling their fancies and interests. While all these are happening, I can confide in you that even Okezie’s close associates are not sure what he actually wants to do after his tenure. This explains why none of them can confidently deny the senate ambition theory,” he said.

Aside the possibility of Abaribe contesting for the party’s ticket with Governor Ikpeazu, observers said another major factor that will come into play to heat up the contest is the internal politics of Abia South Senatorial District itself. The Nation learnt that this politics essentially revolves around an alleged rotational understanding between the Ngwa bloc and the Ukwa bloc. It is important to recall that Abia South Senatorial District comprises six council areas: Obingwa, Aba South, Aba North, Ugwunagbo, Ukwa West and Ukwa East.

Explaining how this internal politics may heat up the politics in the area ahead of 2023 Chief Nwozor Obioma said “there is an unwritten rotation agreement between the Ngwa and Ukwa blocs on the senatorial seat. We therefore expect that this zoning should be respected in 2023. Remember that the former Senate President, Adolphus Wabara, who hails from Ukwa East council, represented Abia South Senatorial District for two tenures, 1999 to 2007, and was succeeded by Senator Abaribe who is currently serving his fourth term at the Senate.

“So, any fair minded person will understand why leaders of Ukwa bloc are not just alleging marginalisation but are also demanding that it is their turn to produce the next senator for the district.”

It would be recalled that the agitation for the senate seat to be zoned to Ukwa did not start today. Ahead of 2019 elections, for example, when Abaribe contested the election for his fourth tenure, Ukwa leaders did not mince words in their opposition.

In one of the several communiques they released to express their concern, they warned that their agitation was no longer party based. The communiqué read in part: “That where the leadership of PDP at the appropriate levels show insensitivity to the legitimate concerns of stakeholders in Ukwa-East and Ukwa-West, whatever becomes the consequences should not be attributed to them.”

Although 2023 elections are still two years away, The Nation learnt that Ukwa leaders are already sensitizing their people on the need to ensure that they produce the next senator for the district.

Dr. Reuben Ikedieze, a political analyst gave an insight into the current goings on in the area. “We are determined to ensure justice is done this time around. Ukwa Nation has been marginalised by their brother, the Ngwa bloc, in the politics of the zone. Come 2023, Ukwa people must be allowed to produce the senator. Don’t tell me it is still early. In a senatorial district that is made up of two distinct groups of indigenous peoples, is it not odd that one of the two will produce both the state governor and the senator? Is it not also glaringly unfair that the senator will occupy the seat for four terms and some people are suggesting that he would return there? What happens to the Ukwa brothers?

“Look, I did not say Senator Abaribe is not doing well as a lawmaker; on the contrary, I think, comparing him with other senators or elected office holders, he has done fairly well. But fair is fair. This is the time to show Ukwa people that they still belong even if their population is smaller than that of Ngwa people,” Ikedieze said.

According to him, Ukwa Nation remains an entity that should be recognised and their due privileges and rights should be accorded them “which is what equity and social justice are all about, as enshrined in the constitution of the country.

You will agree with me that “Ukwa people have been marginalised when it comes to sharing of political positions between the Ngwa and Ukwa so Ngwa people must concede this time around.”

Would they ever let Pantami be? By Sunny Ogefere

2023 election: The north is indispensable, By Fredrick Nwabufo

The Unilorin “Better By Far” Basket And One Bad Apple

Writing on the Wall of Anambra 2021, By Martins Oloja

Underrate Atiku at Your Peril, By Hashim Suleiman

Nigeria needs a ‘strong man’ as president, by Fredrick Nwabufo