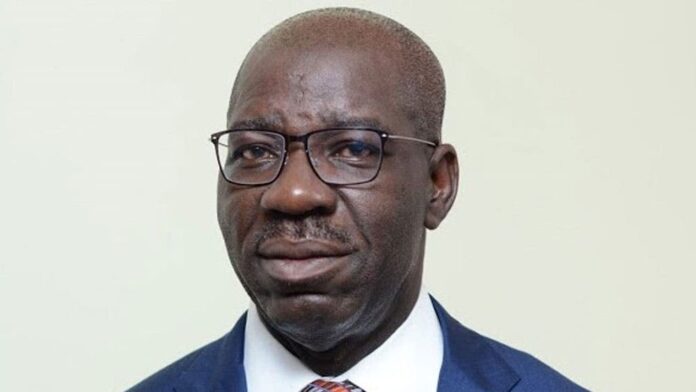 POLITICS DIGEST – WHEN Governor Godwin Obaseki and many of his supporters defected from the All Progressives Congress (APC) to the Peoples Democratic Party (PDP) before the September 19 2020 governorship election in Edo State due to his disqualification by the APC, some political analysts had opined that it was a marriage that may not last but many people did not believe that crisis would erupt so soon; barely eight months after the election which Obaseki won.

As of today, Obaseki has not been able to form a government but the announcement by the Secretary to State Government (SSG), Osarodion Ogie, on Wednesday, of the appointment of Hon Osaigbovo Iyoha as the governor’s Chief of Staff tactically closed the door against any of the members he met in the PDP being part of his kitchen cabinet.

Iyoha has been a very close ally as he was the first member in the state House of Assembly then to publicly declare his support for Obaseki’s election in 2016. He already has his dependable deputy, Hon Philip Shaibu, and Ogie who has been the strategist operating behind the scenes for the governor.

The leadership of the party in the state is in disarray with the purported suspension of the state Chairman, Hon Tony Aziegbemi, and a three-man committee set up to investigate allegations against him. His deputy, Harrison Omagbon, has been asked to take his place as Acting Chairman. Even though Azigbemi has denied being removed from office, he agreed that there are issues in the party that necessitated the setting up of a committee.

To confirm the crisis in the party, Omagbon issued a statement as Acting Chairman, calling on members to remain calm and promised he would reunite the state PDP.

Observers believe that the PDP in Edo is missing people like the late former Chairman of the Board of Trustees of the party, Chief Tony Anenih, who could rally all the divides together but the party, as it is right now, has several warlords across the three senatorial districts holding unto their areas of strength and struggling to outdo one another.

The crisis in the party is multifaceted: members are not united, and there are those who call themselves original members of the PDP who are not united and then the governor who came with his supporters from the APC.

Sunday Vanguard gathered that Obasek has decided to move ahead with strategies to take over the party where the original members may have to “bow to him” before they can retain their membership of the party.

The crisis in the party is believed to have started shortly after the election when some leaders of the party believed that they should have a say in the governor’s appointments.

Some of the leaders, it was gathered, told Obaseki to immediately dissolve the Board of Edo State Internal Revenue Service (EIRS) and that of Edo State Oil and Gas Producing Areas Development Commission (EDSOGPADEC) but they were said to have been miffed when the governor declined and told them that he was planning to extend the tenure of the EIRS Board.

The governor also reportedly requested that as the leader of the party, the leadership of the PDP from the ward to the state level be dissolved and a mini congress conducted to infuse his members who came with him from the APC, particularly the former state Chairman of the APC, Anselm Ojezua, and members of his State Working Committee (SWC) but this was also rejected by the leaders of the PDP. This led to some of them instituting a court case in Abuja to stop the governor from tampering with the leadership of the party.

Obaseki since then reportedly reduced his interaction with the leadership of the PDP and it became a case of the governor working with two sets of SWCs; Ojezua and his team that came from the APC and the elected PDP SWC headed by Hon Tony Azegbemi.

About three wks ago, Obaseki met with leaders who it was alleged he personally selected that included Former Foreign Affairs Minister, Chief Tom Ikimi, former Deputy Governor, Chief Mike Ogiadomhe, High Chief Raymond Dokpesi and Aziegbemi where he was said to have informed them of his plan to dissolve the PDP SWC and call for fresh congresses.

In the letter to the National Chairman of the party, Prince Uche Secondus, and signed by Aziegbemi and the State Secretary of the party, Hillary Otsu, which they said was part of the resolution passed in the emergency and expanded SWC meeting of the party, they frowned at the state leaders’ meeting where it was resolved that the leadership of the party at all levels be dissolved.

They also alleged that the said meeting was called to ambush the state Chairman of the party who they said was in the minority with only three leaders of the party as against ten who came with Obaseki.

They alleged that the governor was being misled by three categories of people in the party which they identified as aspirants for 2023 and 2024 elections, members of the party who lost during the party’s congresses and alleged godfathers they said came with the governor from the APC to the PDP who they said have refused to register with the party in their wards.

In a swift reaction, Obaseki summoned a meeting that had Aziegbemi and members of his SWC and Ojezua and his team where the governor was said to have made some revelations that the meeting he called earlier was suggested by a high profile leader of the party (name withheld) and that the political figure was the one who suggested most of the names to be invited for the meeting but, shockingly, the same person did not show up on D-Day and even allegedly encouraged some of the persons he suggested not to attend.

The governor was said to have informed the meeting that his intention was to make the PDP strong and that the people at the grassroots must be carried along and be part of decision making rather than the existing style where decisions are breathed down to followers.

Sunday Vanguard source said, “After the governor explained his intentions, they asked for time to suggest a way forward and the governor gave 48 hours for that to be done. He also explained to them that himself, his deputy and the SSG were in the meeting he held earlier by virtue of their position and not there to represent any interest”.

However, Sunday Vanguard gathered that the governor may have concluded plans to take over the party irrespective of the position of those opposed to him using two strategies. The strategies, it was learnt include his appointment by the national leadership of the PDP to organise e-registration of members of the party nationwide.

Sunday Vanguard gathered that he has appointed coordinators across the 18 local government areas of Edo and many of them are said to be LGA chairmen who came with him from the APC to handle the planned e-registration.

He is also said to have set up a committee largely made up of those who came with him from the APC to suggest people he would need in his cabinet.

In a related development, which seemed to be part of the plot to take over the party, a congress was called in Egor local government area by loyalists of Obaseki and suspended the Chairman of the party in the council, Manfred Ekundayo, and Secretary, Moses Osarumwense.

A statement signed by eight members of the party executive, including Efosa, Eguavon, Auditor of the party, Dickson Obazee, three ex-officio members Hon Paul Osaremwenda, Alhaji O. Ebomwonyi and Funmi Usiabulu including Idemudia Stanley and Ekhator Stanley, who are both ward chairmen, accused the suspended officials of not allowing the national leadership of the party to resolve the crisis in the PDP in the state among other issues.

The statement passed a vote of confidence on Obaseki, Shaibu, Ogie and the PDP Co-ordinator in Egor, Chief Odion Olaye.

It was reliably gathered that loyalists of the governor held meetings in several local governments few days ago with only one agenda which is to redefine their relationship with the PDP.

When Sunday Vanguard contacted the National Vice Chairman, South-South of the party, Chief Dan Orbih, on the development, he said the issue had not been brought to his attention and he would not want to comment on what had not been brought before his office and referred us to the state chairman.

But a member of the party, who spoke on the condition of anonymity, said: “This crisis is multifaceted; the original PDP members are not united, they are fighting themselves and then you have the governor and those who came with him and are bent on taking over the party.

“This thing is being caused by lack of leadership in the PDP.

“The governor is already working with Abuja even though the issue that the governor is the leader of the party is not in the Constitution of the PDP.

“The end result might be the governor tampering with the party executives or quasi-harmonisation that may not last.”

A leader of the party and former Commissioner for Information in the state, Hon Charles Idahosa, said the best option for the party was harmonisation.

He said the problem in Edo PDP is “a group of people who got used to not winning elections”.

According to him, such people use party structure to collect money from neighboring state governments and share among as they are not really interested in government.

“It is a small clique holding to the party to ransom. How will you say that the governor is the leader of the party and then you insist that you will not harmonise? Just like me, I will be looking at you people, I cannot even produce a councilor in my ward because I don’t have anybody in the ward executive”, Idahosa said.

In the same vein, the senator representing Edo South, Matthew Uroghide, called on members of the SWC to apologise to the governor.

Speaking at a stakeholders meeting he had in his residence, the senator said his zone, in a three-point communiqué, accepted the leadership of Obaseki without reservations.

According to the senator, Edo South PDP expressed implicit confidence in Obaseki and his ability to pilot the affairs of the party in the state and also handed over the entire structures of the PDP to him.

“And three, we directed all members of the State Working Committee, SWC, who are from Edo South, to go and append their signatures to the letter of apology to the governor over the letter the SWC sent to the national body”, Urhoghide added.

He warned party members to abide by the constitution of the PDP which forbids members from making public critical comments about the policies and actions of government controlled by it.

He said, “Those who decamped from the APC were once PDP members. It is foolhardy to say you don’t want people to join you. We cannot bring down our own party that is in government. “If Chief Anenih were to be alive today, he would have been the happiest man. It took us 12 years to get back to power in the state and we have a duty to sustain the government and the party”.