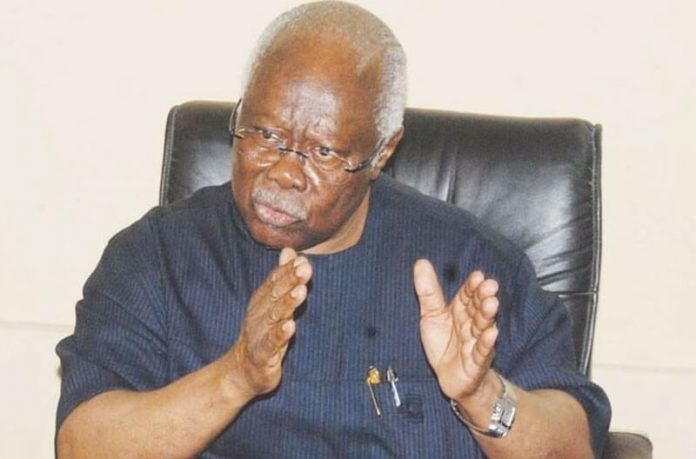 POLITICS DIGEST– After the National Leader of the All Progressives Congress, Mr Bola Tinubu, declared his intention to contest the 2023 Presidential election, former Deputy National Chairman of the Peoples Democratic Party, Mr Bode George, has described it as a huge joke.

George, who was speaking on Monday after Tinubu made the declaration to State House correspondents after a visit to President Muhammadu Buhari, said the number one position in the land was not meant for characters like Tinubu.

This so-called ambition must be a huge joke. The Presidency of Nigeria is not for characters like Bola Tinubu,” he said.

“Look at how he mismanaged the resources of Lagos State. It is surprising that he can even dream of becoming the President of Nigeria. He is living in cuckoo land,” said George.

He added that Tinubu would be shocked by how things will go and how he will be double-crossed by those he is trusting.

While mocking Tinubu for dreaming about the presidency, he said the South-West had quality leaders who could be next President of Nigeria. He, however, said Tinubu was not one of them.

According to him, it will be an insult for the South-West, which is the most sophisticated region in the country, to settle for Tinubu.

He described it as unfortunate that a hallowed ground like the Presidential Villa would be the location for Tinubu to declare his ambition.

Tinubu had promised in late 2021, to declare his presidential ambition in January.

Tinubu, who was governor of Lagos State, said he informed Buhari that he would want to contest for president.

The former governor lamented that he was tired of being a kingmaker and that it was his life dream to run for president.

But reactions against his declaration were quick with party insiders saying he won’t get his wish as the party’s National Convention in February 2022 is still in doubt.

Sources have said the courting of former President Goodluck Jonathan by the APC and his endorsement by two APC northern governors, that the party may wait till June to carry out both presidential primary and national convention.

It is said to be aimed at ambushing Tinubu as the powerful northern elements feel a Jonathan second term will pave way for power to shift to the North.

Buhari to Commission Projects in Ogun