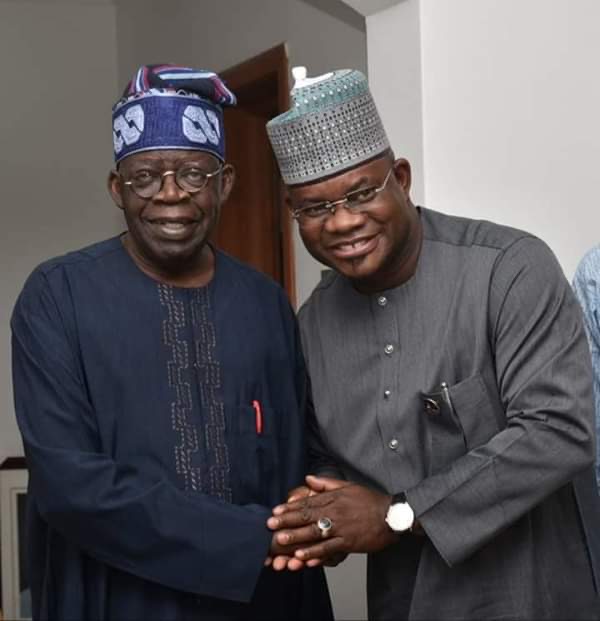 POLITICS DIGEST – Governor Yahaya Bello of Kogi State has hailed former Governor of Lagos State and the National leader of the All Progressives Congress, APC, Bola Tinubu, as a revered, well-respected leader and smart mentor.

Bello said Tinubu is a wonderful kingmaker who has mentored a lot of leaders in this country.

Yahaya Bello stated this while reacting to a question from a BBC reporter, adding that between himself and Tinubu, the latter would make a better president in 2023.

Although Senator Bola Tinubu is yet to indicate interest in the number one office in the country, political pundits and analysts however believe that the APC leader has his eyes on the presidency.

Governor Bello also said he believes Tinubu is a smart leader who is willing to be part of a youthful president to drive the country to success.

Yahaya Bello in the interview with BBC, monitored by Vanguard, said he believed in the judgment of Tinubu whom he knows “would love to have Nigeria on auto cruise very soon”.

Bello noted that as a kingmaker who knows his qualities and limitations, reasons will prevail on the national leader for a youthful president.

He said: “Our National Leader, Senator Bola Ahmed Tinubu is a revered and well-respected leader and mentor who is well respected by all, including me.

“And I know reasons will prevail on him. He will be part of those who will make a youthful government in this country. I believe in his judgment. He is a nice man.”

Governor Bello insisted that young Nigerians are bent on having him contest for the 2023 presidency.

He noted that he hasn’t spent a dime to print a poster but the posters seen in many parts of the country are being sponsored by young Nigerians who believe in his ability to take Nigeria to greater heights.