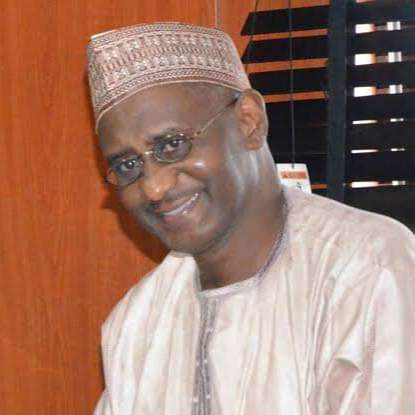 POLITICS DIGEST- He comes across as a no nonsense critic of President Muhammadu Buhari and his administration,at least that is the impression he is keen to present to Nigerians more than three years after his eventful but totally disastrous stint as the Executive Secretary of the National Health Insurance Scheme NHIS.

From relative obscurity,the President announced him alongside Dr Sani Aliyu of the National Agency for the Control of AIDS (NACA),Dr Chikwe Ihekweazu of the National Centre for Disease Control (NCDC) and two others as heads of 5 strategic health institutions on July 6 2016.

In his official curriculum vitae with which he got the job, Usman Yusuf claimed that his role and affiliation at the time, was Professor of Paediatrics in the division of Hematopoietic Stem Cell Transplantation at the Saint Jude Research Hospital Memphis Tennessee.

But it is believed that he had been out of job since 2012 that he returned to Nigeria. Those who knew him back then are now saying that he used to depend on the magnanimity of a friend who owned Abuja clinic for his livelihood.

This new revelation is at variance with claims in his CV that he was an Associate Professor of Hematopoietic Stem Cell Transplantation at St Jude Children’s Hospital in Memphis Tennessee from October 2002 till when his appointment was announced in 2016.

A thorough check showed that the hospital exists in reality and according to information on its website, St. Jude Children’s Research Hospital was founded in 1962 and is a pediatric treatment and research facility focused on children’s catastrophic diseases, particularly leukemia and other cancers.

But In reality,there is an American Society of Paediatric Hematology & Oncology which prides itself as the “only organization uniquely dedicated to the professional development and interests of subspecialists in pediatric hematology/oncology.”

it is a membership body for specialists in the field ‘Professor’ Yusuf is supposedly an expert in,but there are no indications that he is a member ad the one he listed in his CV as part of his educational qualifications does not appear to exist.

And in case any one is tempted to dismiss those revelations with a wave of the hand, how about the Hematopoietic Stem Cell Transplantation Division of the St Jude Children’s Hospital where Yusuf claimed to have worked from October 2002 till 2016 which was neither listed as a department nor a division of the children hospital?

The closest departments to this are the Department of Hematology which is one of 22 in the hospital, and Oncology which has 7 divisions but none is Hematopoietic Stem Cell Transplantation where Yusuf claimed he worked as a Professor of Paediatrics.

Judging from his CV, it seems like ‘Professor’ Yusuf is the only Professor there because the top staff at St Jude either have MD attached to their names or PhD and there is no sign that he even had a PhD or was even at a university where he could have have risen or attain the level of a Professor.

So with these glaring gaps, it would not be out of place to could question whether he is really who he claims to be in the CV he used to get the NHIS appointment in 2016.

That could also be part of the reason he demonstrated what many stakeholders in the Health care sector have described as gross incompetence in his barely one year stint at NHIS during which he left the agency worse than he met it.

There may be doubts about his capacity for the job but what was not in doubt in his time at the helm of affairs at the agency was his capacity to have run-ins with virtually everyone he had contact with aside from the allegations that dogged his one-year stay in an office with a five-year tenure.

Yusuf was first suspended by the then Minister of Health, Professor Isaac Adewole, on July 6, 2017, for alleged corruption, maladministration and mismanagement of resources. He was later recalled by President Buhari, exactly seven months later, on February 6, 2018.

Before then he had taken the unprecedented step of lambasting the minister as not competent to suspend him.

In his response to the minister, Yusuf said, “By virtue of the NHIS Act particularly section 4 and 8 thereof, my appointment and removal from office whether by way of suspension or otherwise is at the instance of the President of the Federal Republic of Nigeria.

“Except removed from office by the president under circumstances specified in the NHIS Act, my appointment is for a period of five years subject to further term of the same period at the discretion of the president.

So it was not a surprise that the NHIS Governing Council led by Professor Ifenne Enyanatu, later slammed an indefinite suspension on Yusuf on Oct. 18 over similar allegations of fraud.

Not quite long after, the Presidency asked him to proceed on an administrative leave to allow for investigations into the allegations and subsequently set up a 7-man panel led to carry out the probe.

At the end of the investigation,the panel led by Hassan Bukar, found Yusuf guilty of breaching provisions of the Public Procurement Act and recommended that his appointment be terminated in the report presented to the President on December 24, 2018.

The report reads: “Relieve the executive secretary of his appointment. Justification: Inability to work in harmony with all the relevant stakeholders in the scheme for the attainment of the scheme’s mandate.

“Established cases of infraction of the following provisions of the Public Procurement Act: Sections 16(6) and 32(7).

The panel also recommended the dissolution of the NHIS governing council.

“Dissolve the governing council. Justification: The panel observed the role of the governing council in the present imbroglio and noted from the interactions that the council has become factionalised and is incapable of providing the required leadership for the scheme.

“The governing council embarrassed the government by exceeding its mandate when it suspended the executive secretary.”

It is also on record that Yusuf directed expletives at the then Health minister in an interview with Punch newspapers even while on suspension.He specific said “F**k the minister”

He made similar comments when another journalist contacted him by phone to react to 2017 audit report, which indicted him

His words: “F*k PREMIUM TIMES. F*k the Auditor General, go ahead and write that.”

It is however stunning that newspapers that reported all his excesses as well as his indictment are among same media propping him up as a Buhari critic even when his record of service is not something any self-effacing individual should be proud of.